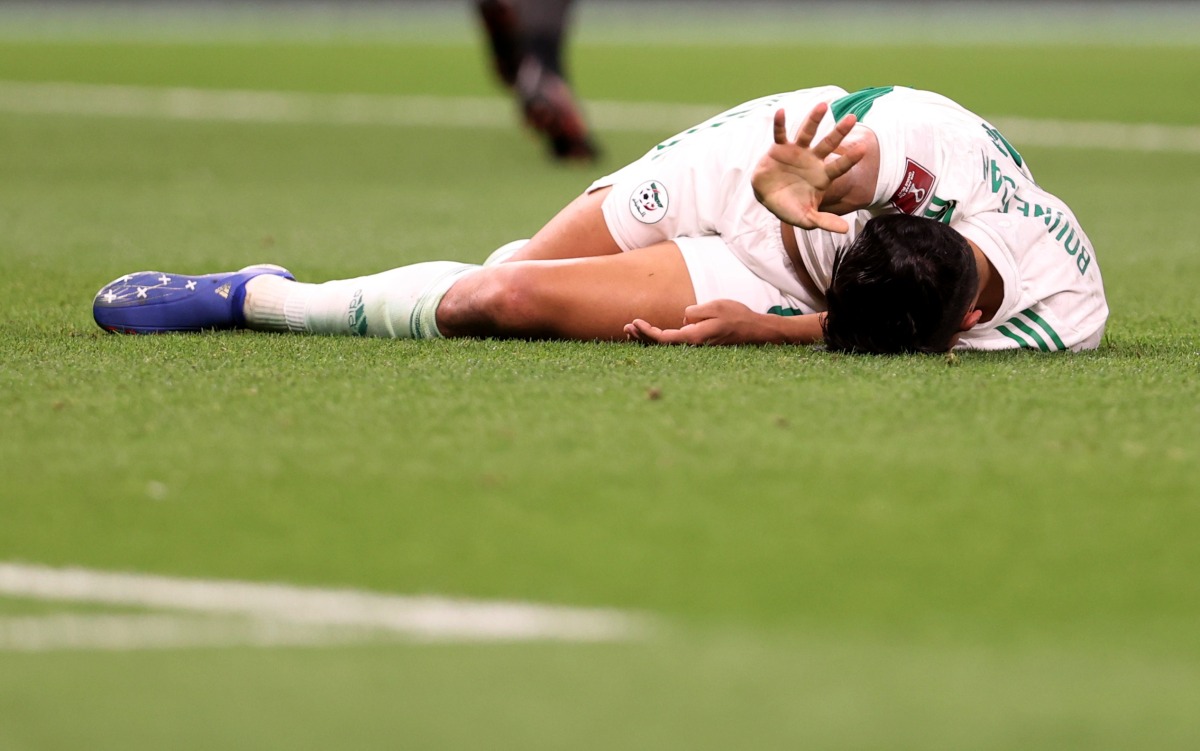 Bounedjah “is fine” after the collision, ready for Morocco

Baghdad’s Algerian Bounedjah reacts after injuring himself in the game against Egypt on Tuesday.

Doha: Algerian striker Baghdad Bounedjah has announced he is 100 percent ready for the shock of the Desert Foxes quarter-finals of the FIFA Arab Cup Qatar 2021 against local rivals Morocco in the “Clash of Maghreb “Saturday at the Al Thumama stadium.

The Al Sadd forward appeared to suffer a concussion in Algeria’s final Group D game against Egypt after falling heavily following a collision with Egyptian goalkeeper Mohamed El Shenawy in the first half . The forward was substituted and did not come out of the locker room in the second half as Egypt managed to seal the top spot thanks to a better fair play record after a 1-1 draw in regulation time.

“I’m fine, and in football you hurt yourself,” Bounedjah said in a video posted on Facebook by the Algerian Football Federation.

“We assure all the fans that my health is fine after having had x-rays and tests. I am 100% ready and we are getting ready for the next game.

Bounedjah’s condition is said to be closely watched by Al Sadd, who yesterday unveiled former Watford coach Javi Gracia as their new coach.

Bounedjah has been prolific in a trophy-laden period for Wolves with 160 goals in 155 appearances for Al Sadd.

“The collision between the goalkeeper and me was spontaneous and unintentional, and this is normal in football. Today (yesterday) was a day off for me, and tomorrow I will be ready to train,” added Bounedjah.

The 30-year-old star, who scored the winner for Algeria in the 2019 Africa Cup of Nations final, said he was in excellent condition.

“The injury I suffered was severe, and right now I’m in very good shape. In the next few days, I will regain all my strength and be ready for the Morocco game.

With two goals and an assist in the competition, Algeria clearly struggled in the absence of Bounedjah. In the second half, Egypt dominated its North African neighbors, Algeria rarely being a threat while Yacine Brahimi and Mohammed Belaili fizzled out.

“As for the last match with Egypt, it was tough. We had a great first half, and at least we could score two goals, and the fans in the stadium were cheering us on wonderfully. In the first half, I also put pressure on the defenders and I didn’t put them at ease, so I hope I’ll be ready for Morocco, ”he added.

On the other hand, Algeria coach Madjid Bougherra has expressed his dissatisfaction with the performance of Argentina referee Facundo Teo in the decisive match against Egypt.

The referee awarded Algeria four yellow cards and a late red card with Egypt having received just three warnings. With the teams tied on goals and points, the fair play decider was not greeted with joy by the Algerians, unlike their opponents.

“This type of game is like that, and it’s a high level. But you know it’s not easy when you play three times in a short period of time. You can see that Egypt also dropped fitness in the second half.

“I am very upset by the referee who gave us too many yellow cards and one red. I saw the VAR review, and it is not a red card. We lost out of fair play, but in general “I’m proud of the players. We were tactically disciplined and in the end we ended up with a draw,” said Bougherra.

Looking ahead to the Morocco shock, the former French-born defender said: “When you play a competition like this, you want to play these matches. It’s football, so we have to recover very well, and again once it will be a big derby.