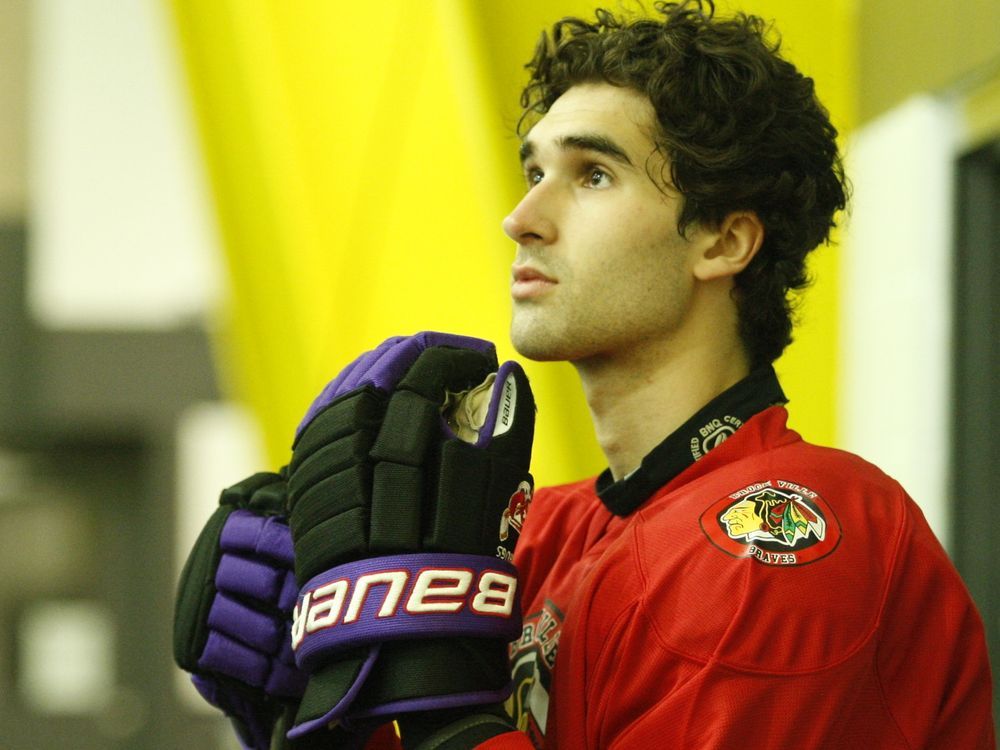 For Thomas Haynes, it’s about working hard every shift and getting better.

The Brockville Braves captain is eager to resume what he believes is a serious race at the Central Canada Hockey League (CCHL) championship.

Just after mid-season of the regular season, Brockville is third overall in the 12-team CCHL. The Braves Jr. A are one point ahead of Hawkesbury and two points ahead of Kemptville; Renfrew is four points behind but has four games in hand against those three teams.

The top four teams at the end of the season get the ice rink advantage in the first round of the playoffs.

Brockville had won six in a row before being beaten 1-0 at Hawkesbury two Sundays ago. Last weekend’s games were postponed when a majority of CCHL teams voted just over a week ago to suspend play for the remainder of 2021 in response to the COVID-19 pandemic ongoing and an increase in the Omicron variant.

â€œWe were kind of heating up towards the break,â€ Haynes said in an interview from his home in Oakville this week. “I hope we can pick up where we left off.”

The Braves experienced an upheaval in the second week of November. A five-man deal with Carleton Place saw forwards Ryan Bonfield and Caleb Kean join the Braves to bolster the team’s power play.

Since the trade, the Braves are 9-3. Bonfield scored 10 goals in 12 games and was named the league’s player of the week just before the break. Kean has six points but was sidelined with injury in December.

The acquisition has helped the Brockville team a lot, according to Haynes.

â€œWe love these guys, and now they’re part of our fraternity,â€ said the 19-year-old defenseman.

Defenseman and now former captain Jackson Hay, along with forwards Marco Iozzo and Liam Goreski, have left the Braves as part of the deal.

â€œWhenever someone is traded, no one is really happy,â€ Haynes said. “No one likes to see someone walk into that locker room.”

However, the new captain has admitted that the exchange appears to have given the team a boost. Haynes is hoping the trade turns out to be the right decision as the season progresses.

The addition of goalkeeper Sami Molu last month also gave a boost. Molu is 6-2 in his starts and has an impressive .928 save percentage.

As of now, the Braves are scheduled to open 2022 at home against Carleton Place on Friday, Jan.7. Brockville would then host Renfrew the following Sunday afternoon.

â€œWe would love to start right away. If not, we’ll likely consider a full and healthy training when we get back, â€said Haynes. “Either way, we’re in a pretty good position.”

The extended break gives players more â€œR and Râ€ time to heal pain and recover from injuries, the captain noted. The prospect of having Kean and compatriot Colin Stacey back in the lineup in the new year should provide Brockville’s offense with additional firepower.

â€œPlaying hard-nosed hockey that keeps us going,â€ said Haynes. â€œStay consistent every night, work hard and outperform the other teams. “

When asked about Christmas, Haynes said he failed to make a list for Santa Claus.

â€œThe best Christmas gift I can get is success after the break,â€ he remarked.

Haynes and fellow Braves defenseman Kevin Fitzgerald are tied for seventh in the CCHL in assists by defenseman with 13.

Haynes, who was with the Brampton Admirals from the OJHL before coming to Brockville, was named CCHL Player of the Week in October. Braves teammate Evan Boucher, who is second in the league with 22 goals and 40 points, received the honor earlier this month.

Brockville is the only team to have three players named Player of the Week this season.

The two games postponed from last weekend were added at the end of the regular season in March.