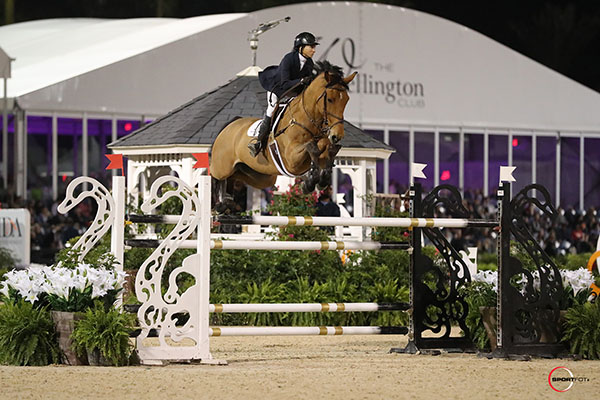 As the 2022 Winter Equestrian Festival international competition was held last week at the Equestrian Village, all eyes were on the international arena at the Palm Beach International Equestrian Center on Sunday, January 23 for the $50,000 Marshall prize. & Sterling/Great American Insurance Group National Grand Prix, part of the exciting Saturday Night Lights series. Laura Chapot delivered a thrilling performance as she and Chandon Blue raced through the clocks for the win.

Forty-five participants competed on the track laid out by Nick Granat, with 11 faultless combinations returned to the jump-off.

Grand Prix Qualifier winner Cathleen Driscoll was first in the ring for the shoot-off aboard her winning mount Flotylla, owned by Don Stewart. Driscoll replicated his faultless performance on lap one, putting in a quick and clean effort in 37.07 seconds on the shortened course that would see him hold onto fourth place.

A few horses later, it was Nick Dello Joio and Cornet’s Cambridge of the Berry Group who set the new time to beat at 36.33 seconds. It would finally be good enough for a third place.

Dello Joio’s time was quickly reduced as next was Irish Olympian Shane Sweetnam, who finished the short course in 35.728 seconds with James Kann Cruz, owned by Gizmo Partners LLC. However, Sweetnam would have to settle for second place.

After watching their new target in Sweetnam and James Kann Cruz, Chapot and Chandon Blue went pedaling to the metal, finishing in 34.485 seconds for the victory.

It had rained intermittently all day and started again at the start of the barrage.

Chandon Blue, a 17-year-old Oldenburg gelding, came to Chapot from Cian O’Connor, who helped Chapot along the way with him. He had an extended break last year when Chapot fractured his arm, requiring surgery and the insertion of a metal plate.

“He’s a bit exuberant at the moment. He’s so happy to be back in action,” Chapot said. “He was always a real tester and he has a huge, huge heart. I think it always helps keep the horses interested and strong.

Chapot is thoughtful in her approach to maintaining her horse’s longevity and successful career.

“We don’t work him too hard, but at the same time he loves it here in Florida, so I’d love to give him the opportunity to get him in some of the nice classes,” she said.

It is the only national Grand Prix on the circuit to take place under the floodlights, and Chapot jumped at the chance to compete in this environment.

“I thought it would be a good opportunity for him because I know he’s been in the spotlight before and he loves the excitement and the crowd,” Chapot said. “He was so focused tonight. I was happy because he was probably as nimble as he’s been the whole time he’s been here.

Chandon Blue, a horse Chapot owns with his mother, Mary Chapot, loves the love and attention not only from the crowd, but also from the stable. His sweet and kind personality makes him an outstanding character.

“He has a big personality. There are a few horses that have really strong personalities, and that’s what I tend to gravitate toward,” Chapot said. “Those are the horses I love the most. It means a lot to me that he wins this class because he really deserves it.

It was a significant victory tonight for Chapot who, since his injury, has been working with Wendy Coren and David Lundquist for rehabilitation. Her sponsors and customers rallied behind her, so she was delighted to punctuate her comeback with a Grand Prix victory.

“I feel like it’s just a nice way to be like ‘I’m back.’ Tonight, [Chandon Blue] was really on a mission. It all fell into place, which is a great feeling when it all happens like this,” she said.

Tennessee’s No. 1 hits Memphis 4-0 to advance to ITA Indoor Nationals