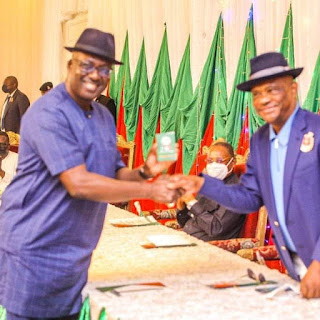 At the ceremony, he confessed that he made a huge mistake in joining the APC because the party disappointed the people.

Noting that the APC has broken its promise to the people of Rivers, Nwuche said he has gone on political sabbatical but has returned home where he truly belongs.

He went on to praise Governor Wike for being an exemplary politician.

In addition to being humble, he says Governor Wike used his power to uplift people instead of slaughtering or oppressing them and was a quintessential artist.

In his own words, â€œWike is a master at the art of politics because he does things for the people, regardless of party affiliation. “

He said he had learned a lot over the years and brought his vast experience to help take the PDP and Rivers State to greater heights.

In his remarks, Governor Wike said Nwuche’s return was huge for the PDP as he is a pillar of his community.

He said he will continue to work for the people and hopes more people will be inspired to return to PDP as a result of the projects he has executed in all LGAs.

He said: “It is clear that we have kept our promises and only an enemy of the people will remain in the opposition”

Nwuche was then given a party card and umbrella by the President of Rivers PDP, Amb. Desmond Akawor.