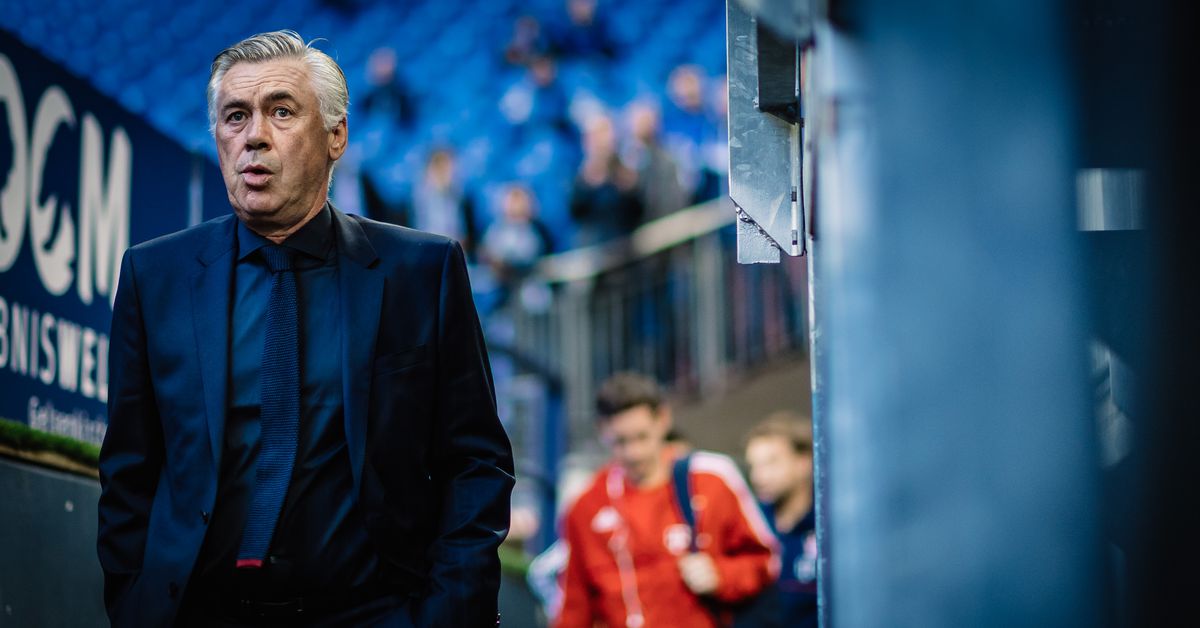 How was Ancelotti’s time away from Real Madrid?

On June 1, 2021, Real Madrid replaced a triple Champions League-manager winner with another triple champion. Zinedine Zidane had just left the club on his terms for the second time. Real Madrid have explored options like Mauricio Pochettino, Antonio Conte and Raul Gonzalez, but have chosen to revert to a former hero.

The appointment of Carlo Ancelotti came as a surprise, although on paper it was as easy as replacing one legendary manager with another. But Ancelotti’s time away from Real Madrid has given way to skepticism. I myself have been a staunch admirer of the old man for as long as I have known football. But even I couldn’t escape the skepticism. We will have plenty of opportunities to review Ancelotti’s second stint at Real Madrid shortly. Ancelotti has managed teams from three different leagues during his absence and there was a lot of interesting things to watch while he was away.

Ancelotti did not immediately return to top management when he was sacked by Florentino Perez in the summer of 2015. He took a year off and returned in 2016-17. Bayern Munich have hired Ancelotti after the end of Pep Guardiola’s stay at the German club. On paper, it was obvious. Ancelotti had the European pedigree that Bayern sought but failed to achieve under Pep. Ancelotti’s domestic record was pretty ordinary, but in 2016-17 Bayern still dominated the Bundesliga like never before.

Bayern Munich have not allowed an influx of new transfers in Ancelotti’s debut season. Freshly crowned European champion (of 2016), Renato Sanches arrived from Benfica and Matt Hummels arrived from his rivals Borussia Dortmund. Bayern let go of a lot of young players that summer. Among the notable names to leave are Mario Gotze and Pierre-Emile Højbjerg.

Bayern Ancelotti dominated the 2016-17 season. He used his favorite 4-3-3 formation which brought him success at Real Madrid. Bayern played on a high defensive line with a strong defender consisting of Philip Lahm, Hummels, Jerome Boateng and David Alaba. They won the Bundesliga this season with the less goals conceded (22) among all the teams in the top 5 of the European championships. The Bayern midfielder’s engine was powered by Ancelotti’s old pal Xabi Alonso. With Vidal’s versatility and Thiago’s creative brains, there weren’t many better midfield lines in Europe around this time.

In the front row he had a scoring machine, Robert Lewandowski – again a familiar profile like Cristiano Ronaldo at Real Madrid. Lewandowski was backed by Bayern Munich legends – Thomas Muller, Arjen Robben and Frank Ribery. Ancelotti’s first season in Germany ended with two titles: the Bundesliga and the DFL Supercup. They failed in the DFB pokal semi-finals and crashed into none other than Zidane’s Real Madrid in the Champions League quarter-finals. Cristiano Ronaldo has scored five goals from the two matches in Munich and Madrid.

Ancelotti loaned James Rodriguez to Bayern Munich from Real Madrid at the start of the new season. His swan song in Munich would soon collapse. A seemingly inferior training methodology to that of former manager Pep Guardiola, several infamous selection decisions and a 3-0 loss to PSG in the group stage of the 2017-18 season ended the career of ‘Ancelotti at Bayern Munich. There have been numerous reports of Arjen Robben publicly criticizing the Italian manager over his training methods. But Robben later denied these reports. However, Carlo Ancelotti’s son Davide Ancelotti gave insight into his father’s methods in an interview with La Gazetta.

Davide said: “He’s someone who delegates a lot, which means when you work for him you have a lot of responsibility. Being able to work with him is very instructive for me because he, even if I am biased, is the best in the world ”.

Before we get to Ancelotti’s time at Napoli, we need to delve a bit into his predecessor’s time at the club in order to better understand why Ancelotti was hired by Napoli in the first place.

Carlo Ancelotti was hired as Napoli manager for 2018-19 after president Aurelio De Laurentis sacked fan favorite Maurizio Sarri, who was in charge of second place for two consecutive seasons. Napoli president obsessed with Serie A title and saw Ancelotti as the perfect man to dethrone Juventus.

Sarri’s overwhelming football mark was pleasing to the eye and gave Napoli football a certain identity. The buildup of short passes from the back to invite opponents to squeeze and the players’ constant movement to create space between the lines was the tactic Sarri almost religiously followed. Attacking was the best form of defense for Sarri. His team selection methods, however, didn’t have much room for rotation. This pressing and physically demanding style of play, combined with Sarri’s refusal to turn, took a toll on the team, leading to a noticeable drop in performance in the second half of the 2017-18 season.

Ancelotti was brought in to come up with a more sustainable style, integrate the rotation and eventually lead the team to the always so elusive Serie-A title on which Juventus had an iron fist. Well, initially Ancelotti looked promising. He turned more than Sarri and replaced the accumulation of short passes with quick diagonals. Ancelotti inherited Sarri’s 4-3-3 lineup but left room to easily turn into a 4-4-2 lineup. In addition to full-backs, wide midfielders often created a 2-4-4 form in possession – to stretch the field wider. This would allow his players to play fast but with longer passes instead of Sarri’s constantly moving, short passing pattern.

In 2018-19, among the teams of the 5 best European leagues, Napoli Ancelotti finished fifth in xG-differential, fifth in shots on target, first in shots / 90, first in stroke creation actions, and sixth in total number of through balls. But Napoli once again edged Juventus – this time by 11 points.

The dismissal of Ancelotti in Naples was rather surprising. Despite looming doubts, his side reached the knockout stage of the Champions League with a 4-0 win over Genk on Matchday 6 of the 2019-20 group stage. Ancelotti was sacked by De Laurentis shortly after the game.

Ancelotti’s return to the Premier League may have come as a surprise to many, but in reality it was not. Farhad Moshiri took over Everton as majority investor in 2016. His main goal was to recruit a world-class manager to make Everton a real force in the Premier League. His initial plan failed catastrophically when he had to sack Ronald Koeman in the middle of the season. Ancelotti had just been sacked by Bayern Munich around this time and was enjoying a moment of relaxation outside the heat of football. Ancelotti’s entourage were approached by Everton and they were even impressed by the plans sketched out by Moshiri. However, Ancelotti himself seemed reluctant to take over a team mid-season. Ironically, that’s exactly what he would do a few years later.

Ancelotti joined Everton in January 2020 on a long-term contract and a hefty take-home pay of £ 6million. He also received the assurance of big money signings. With eight wins in 19 Premier League games, Everton from Ancelotti finished the season in 12th place in 2019-20. The summer before the 2020-21 season was about to get a lot more interesting for Carlo and Everton. Ancelotti brought former players James Rodriguez and Allan to the club. They were joined by Abdoulaye Doucouré. Everton’s midfield trio looked formidable.

Ancelotti returned to his formation again in 4-3-3. Aided by the forward-thinking prowess of Lucas Digne, aerial threats from Richarlison, Calvert-Lewin and Yerri Mina – Everton began to string together a string of good results at the start of the Premier League season. At one point, they even led the table. But the second half of the season was far from ideal for Carlo Ancelotti’s side. At times, plagued by fitness issues and due to the lack of depth in the squad, Everton’s season fell apart. Perhaps their last hurray of the season was the 2-0 win over Liverpool in the Merseyside derby but a 10th place made their season an ordinary end to the season.

Everton finished the PL season 15th in total number of shots. Their ball progress also seemed to stagnate as they finished outside / on the edge of the top half for progressive passes, passing in the final third and passing in the penalty area. They weren’t an efficient dry cleaning team either. Ancelotti’s move to Everton had the same pattern as Bayern and Napoli – he was promising at the start without showing any sign of significant progress in later stages.

Ancelotti is a triple winner of the Champions League, winner of the league title in several leagues of the first five leagues, an absolute legend of the managerial world and a beloved character of Real Madrid. The circumstances of his return were not exactly ideal, but I found optimism in his work in Naples. Ancelotti has been questioned in the past due to its lack of spins and rigid gameplay. But he did pretty well in his first year at Naples. Real Madrid are in desperate need of a lasting style of play that can help them regain their authority on the pitch. Is Ancelotti the right man for the job? Can he get his mojo back? Only time will tell.