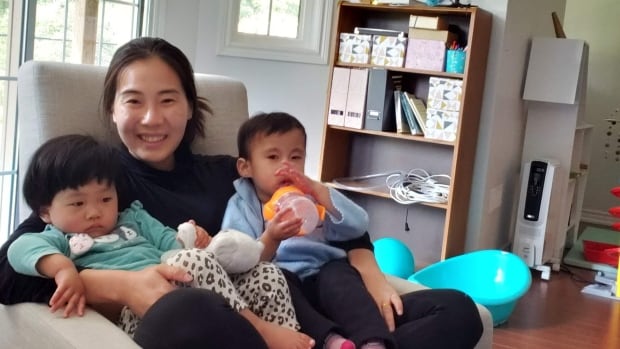 I was raised to be the “woman who had everything”. Then I became a stay-at-home mom

It’s been a year since my body crumbled under the stress of pandemic life. In the spring of 2021, I took a six-month leave from my legal profession, which I later extended to continue my recovery and homeschool my autistic daughter.

I was nervous and exhausted, but mostly I felt guilty and felt like I was losing my identity as a professional mother.

I am the first child born in Canada in my family. I grew up in a multi-generational Korean home in Toronto with two sisters, our parents and our paternal grandparents. My parents and grandparents did not explicitly use their sacrifices to make me feel guilty and make me obey during my childhood. However, I was often aware of the tough choices they made to ensure I had every chance. By choosing to rest from the rat race, I felt like I was minimizing what they had given up for me.

Around the dinner table, my family’s story was often remembered with gratitude and joy, and their sorrows considered the inevitable cost of establishing our family in a new land.

My grandparents were born in Pyongyang, North Korea. On December 5, 1950, my late grandfather Man-Young Lee and his surviving brother decided to follow the retreating American troops south. (The older brother had been killed in an air raid months before.) They packed up a handful of belongings, never imagining that the Korean border would close, forever separating them from their parents.

The two young men joined a large contingent of refugees traveling south. Parentless and penniless, my grandfather and his brother earned money by mending the worn rubber shoes of their fellow refugees. The brothers earned enough to buy a wooden cart and start a porter service for the wealthier refugees. They continued south before settling in Busan, South Korea.

That same December morning, my grandmother Hyung-Shin Bai heard explosions coming from downtown and saw the skyline go up in flames. After learning that American troops in Pyongyang were burning their weapons in anticipation of retreating, she and her siblings left their parents and younger brother behind to head south.

They began their escape on foot and stumbled across a southbound coal train carrying refugees. My grandmother sat on piles of coal for three days before arriving at the border between North Korea and South Korea. She too eventually emigrated to Busan.

My grandparents met in Busan and got married. My grandfather joined my grandmother in the cosmetics business. He was a natural entrepreneur and according to family tradition, his business was one of the first domestic cosmetic manufacturers in Korea importing technology from Japan. In 1975, he sold his lucrative business and factory to escape South Korea’s post-war political instability. He immigrated to Canada with his young family.

My grandparents started life in Toronto cleaning office buildings at night. Later, they operated a small grocery store 15 hours a day, 365 days a year. My father spent the evenings and weekends of his youth working in the family store. After I was born, my parents worked full time for decades while finding the time to drive my sisters and me to after-school programs and religious events, and to prepare crispy rice squares for fundraisers. school funds. We weren’t rich, but we were never in need.

In our loving home, I was encouraged to be proud of my accomplishments. My parents grew up in a Korea where overeducated women were inconvenient. Even the most educated women would eventually leave the workforce after having children. My parents happily told their three Canadian-born daughters that in Canada there is nothing about being a woman that stops us from excelling.

“In Canada, my grandfather often said, you can have it all. And I tried to have it all. I wanted to prove that their life of sacrifice was not in vain.

And for a number of years, I had it all – a thriving career and a great family – but I was overwhelmed and overwhelmed. I was consumed by the need to capture that elusive work-life balance (does it really exist?). Despite my health issues, I couldn’t help but feel like I wasn’t doing enough at home or at work.

When I mentioned the possibility of taking time off from work, my husband assured me that despite the financial difficulties, we could make ends meet as a single income family. We recognize that the ability for a parent to choose to stay home is a privilege that many Canadians do not have.

I then announced to my mother that I was interrupting my career.

Before I could apologize for being selfish, she replied, “You made a wise decision. When I told my father, he consoled me. And relief filled my heart.

Parenthood in all its forms is hard work. It is difficult and relentless. Mimi and Haejin, my current “employers”, are both lovely and ruthless (and the pay is terrible). Despite the daily chaos, being a stay-at-home parent taught my heart to rest. I no longer strive to do and be at the same time.

Whenever my family pushed me to pursue a life they couldn’t, I assumed they wished me fame and fortune. I see now that what they wanted for me was freedom. These two generations structured my childhood in such a way that I would have the freedom to be the most complete version of myself, whatever that version was. I am humbled and honored to be the recipient of such an expensive privilege.

My decision to rest has brought us closer as a family, mainly because I regularly show up unannounced in search of babysitting services and homemade Korean food. My time off gave my ever-supportive grandmother and me the gift of time. We spend many afternoons together, which has been especially valuable during times of pandemic isolation.

Months before he died, my grandfather awoke his cancer-riddled body to watch me in court. He told me it was one of the best days of his life. He told me that sitting in the gallery, listening to his granddaughter dressed in a lawyer’s robe, he remembered the sorrows that had filled his life to bring him to this day.

If he had lived a few more years, I’m sure that day in court would pale in comparison to the day his eldest granddaughter decided to rest in the privilege he had earned.

Do you have a compelling personal story that can provide understanding or help others? We want to hear from you. Here is more information on how to introduce ourselves.