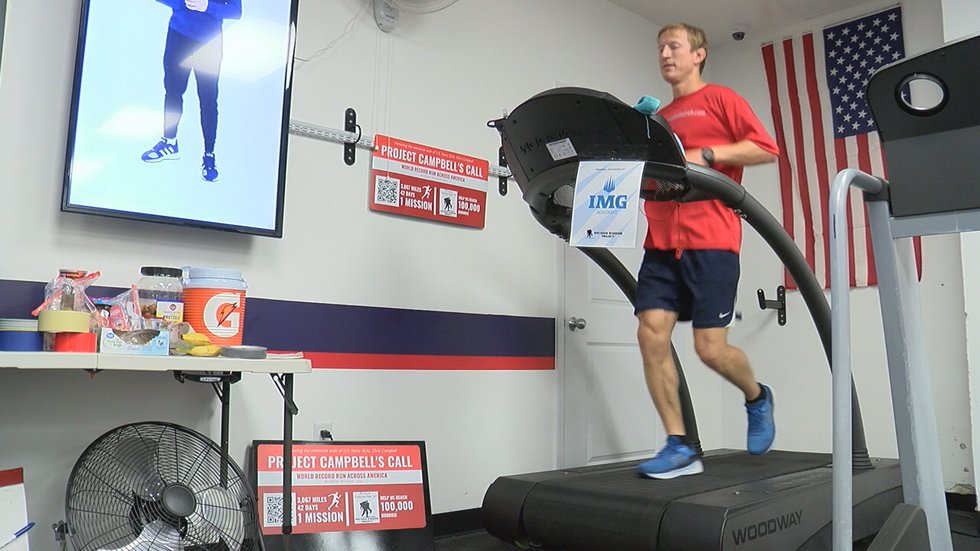 SARASOTA, Fla. (WWSB) — Nels Matson is trying to cross the country in less than 42 days, and he wants every step to count to help veterans across the United States.

“I’m just kind of like an old-fashioned messenger,” Matson said while maintaining a steady jog on his treadmill. “I just carry his message on foot.”

Matson plans to run from California to New York in less than 42 days.

The hope is that by training all day at the downtown gymnasium, he will attract the attention of gym patrons, but not for himself.

“I’m doing this to get Chris Campbell’s message across,” he said.

Chris Campbell was a Navy SEAL who was killed in action. In 2011, his helicopter was shot down by the Taliban in Afghanistan.

In his will was a handwritten note. He wrote that his dying wish was for 100,000 people to donate to the Wounded Warrior Project. It’s a lofty goal that his family has already achieved.

So far, more than 30,000 people have joined the cause by donating.

However, Matson is trying to push that number even closer to that finish line.

His run across America, called Project Campbell’s Call, draws more attention to Campbell’s dying wish. Matson encourages anyone who watches him train and race to donate to the Wounded Warrior Project.

Matson said he never knew Campbell, but heard his story through his sister and felt compelled to help.

It would, of course, be amazing if he could break the world record in honor of Campbell. He said it would help leave a lasting legacy for Campbell and his mission to continue supporting other veterans beyond his own death.

“So we can carve something in stone that continues to last a little longer with his name on it,” Matson said.

Matson will race at the F45 lineup in downtown Sarasota from 5 a.m. to 7 p.m. all Sunday. Everyone is welcome to come to the gym to watch him run and donate to the cause.

If you can’t come in person, you can still make a donation by clicking here.