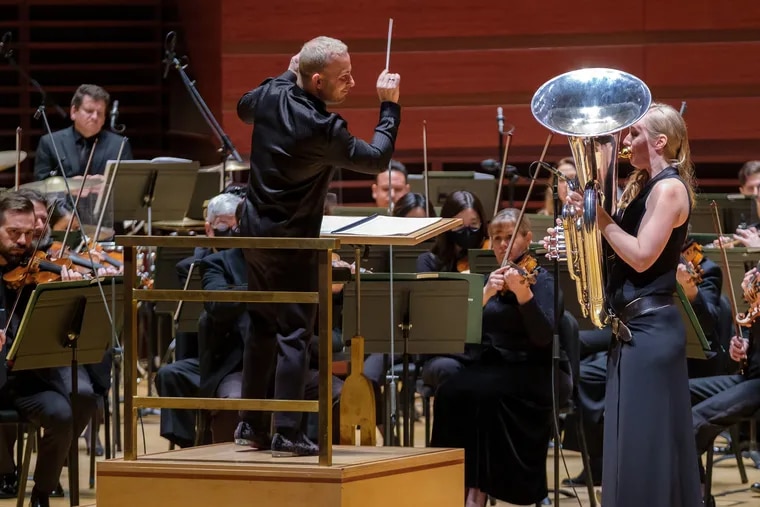 Here are four words that would never have been likely to be found together: Wynton Marsalis Tuba Concerto.

But they’re there for the Philadelphia Orchestra weekend subscription concerts, a world premiere co-commission for an unusual soloist of the great jazz trumpeter / composer – in one program (repeated at 2 p.m. Sunday in Kimmel Center) which also presents Brahms conducted by musical director Yannick Nézet-Séguin. On the performance side, what I heard on Friday was in the three best concerts of Nézet-Séguin’s tenure – really – just as he’s about to take a month off.

Tuba concertos are few in number: the instrument is most often used as the foundation of the orchestra’s tone, and not as something for the star. But the orchestra’s Carol Jantsch dramatically expands what the instrument can do, and Marsalis’ new concerto merges those powers with a great sense of humor in a piece that must have been brilliant to write.

Among the most well-known tuba concertos, Ralph Vaughan Williams surrounded the instrument with his usual prettiness, John Williams found the depth of soul in the depth of the tuba sound, and Michael Daugherty used it as the source of the sound. American impressionism. In Marsalis’ playful four-movement work, the tuba often towers over a mass of orchestral activity – I have long appreciated its interrupted impulsiveness and ability to go in several directions at once – in what often feels like a catalog of rhythms, with clapping and playing. But even if it casts a wide net on that forehead, nothing is what it seems, whether it’s an almost but not quite bolero beat or a 1940s dance group. repeated with 21st century ears.

Jantsch’s complex but effortless passages weren’t seriously exploited until the final movement – in a feat of deferred gratification that showed how Marsalis conceives of long stretches of music with greater clarity than before. Another new development in this piece is a spiritual sense of when a movement has to stop. And perhaps only another brass player like Marsalis could hope for Jantsch’s convincing use of extended techniques that can only be loosely described as simultaneous hiss and buzz.

Brahms’ Symphony No. 1 has reserved its share of surprises, especially since Nézet-Séguin has so far lacked a convincing point of view for the symphonies of this composer. Not now. A portal can be Beethoven, whose fierce Symphony No.5 seems to be quoted in Brahms’ first movement: he apparently unlocked a vision of Brahms that felt anything but comfortable, but tortured to frenzy. The still striking opening was double the usual speed, which was not just an effect but a structural pillar matched by the speed and intensity of the final movement. It was Brahms without the usual polish – drastically redesigned but with an overall consistency that worked.

The sound of the orchestral strings was full bodied but too thin and determined to be lush. In the second and third movements, the string portamento – a way of connecting notes that died out in the 1950s – gave an impression of music floating in the air. In the chorale of the final movement, the superb brass mix projected dignity and soul. But just so you know everyone on stage is still human, there are some slightly messy entries that told you the orchestra is working to its limits.

Nézet-Séguin was firing on cylinders that I did not know. And if his next sabbatical is what it takes to keep those kinds of performances going – in addition to his long-term commitment to new music – I say “Do it!” “