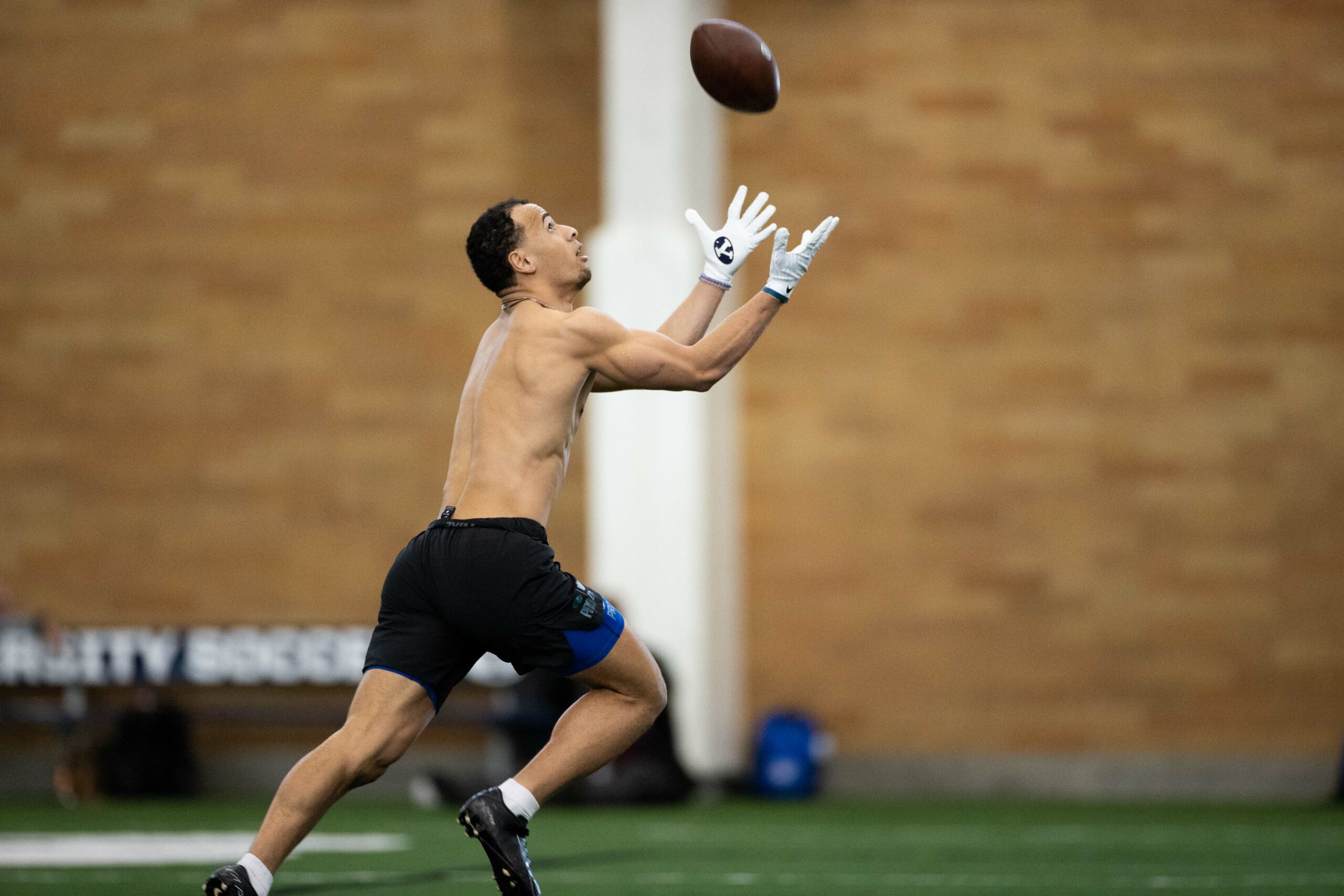 Road to the Draft: Neil Pau’u

The Road to the Draft is our five-part series detailing BYU’s latest batch of NFL prospects hoping to hear their names called in this weekend’s upcoming draft. Here we look at Neil Pau’u, the senior wide receiver who became a staple in BYU’s passing offense as quarterback Jaren Hall’s favorite target.

Family ties helped catcher Neil Pau’u at BYU, where his older brother Butch played 40 games as a linebacker from 2015-18.

“I chose BYU just because my brother was here,” Pau’u said. “We must have played a season or two together in high school, so I wanted to continue here in college.”

Initially committing to BYU as a high school sophomore in 2012 before officially signing near the end of his tenure in 2016, Pau’u recorded 1,484 yards and 13 touchdowns in four seasons as a Cougar. In 2021, Pau’u led the team with 46 receptions and tied with Puka Nacua for a team-high six touchdowns, racking up 526 yards in the process before a leg injury against State of the State. Idaho does not end its season prematurely.

In BYU’s season opener against Arizona, Pau’u led the Cougars to a win with eight catches for 126 yards and two touchdowns, a career night for the veteran wide receiver.

“The first game we missed, but that was just the environment,” Pau’u said. “Training all of fall camp for a game…having so many people there is probably my favorite moment.”

Despite maintaining an additional season of seasonal eligibility, Pau’u opted to declare for the NFL Draft in December.

“I think it was just time for me to leave BYU,” Pau’u said. “I had been there for four years. It’s just time to see what else there is for me.

“It was cool to be here to meet new people too, and [make] new friends that I will have for the rest of my life,” Pau’u said of his training group experience.

When it came to choosing a site to train, Pau’u was originally drawn to Florida or California. However, his agent unexpectedly recommended Grossetti’s operation in Pennsylvania.

“Being here in Pittsburgh is way different,” Pau’u said. “I’m a west coast kid, I’m a city kid, but I loved every moment of it.”

Pau’u wanted to find a place to train where he could concentrate. Being alone to focus on football without distractions is why Pau’u decided to train in Pittsburgh.

“I was able to focus not only on my physicality and preparing for the draft and the professional day, but I think the most important thing is my mental (health) and my ability to find peace,” said said Pau’u.

“zack [Wilson] explained to us that there is so much time in the NFL [to focus and train], and when you get to that part, you’ll understand it,” Pau’u said. “Now that I’m here, there’s a lot of time to reflect and a lot of time to grow as a person.”

Heading into BYU’s pro day, Pau’u had certain number goals he wanted to hit in the various drills.

“I wrote them, some of them will be a little out of reach I think, but I think we’ll try to get them,” Neil said of his Pro Day goals.

After his professional day, Pau’u expressed his gratitude for the opportunity to perform alongside his former teammates.

“Two of them [Tyler Allgeier and Uriah Leiataua] are roommates with me. James is really cool and Samson is Samson – you know, always brings the energy,” Pau’u said. “It was cool to be able to train with these guys. We talked about it before, it’s just a dream come true.