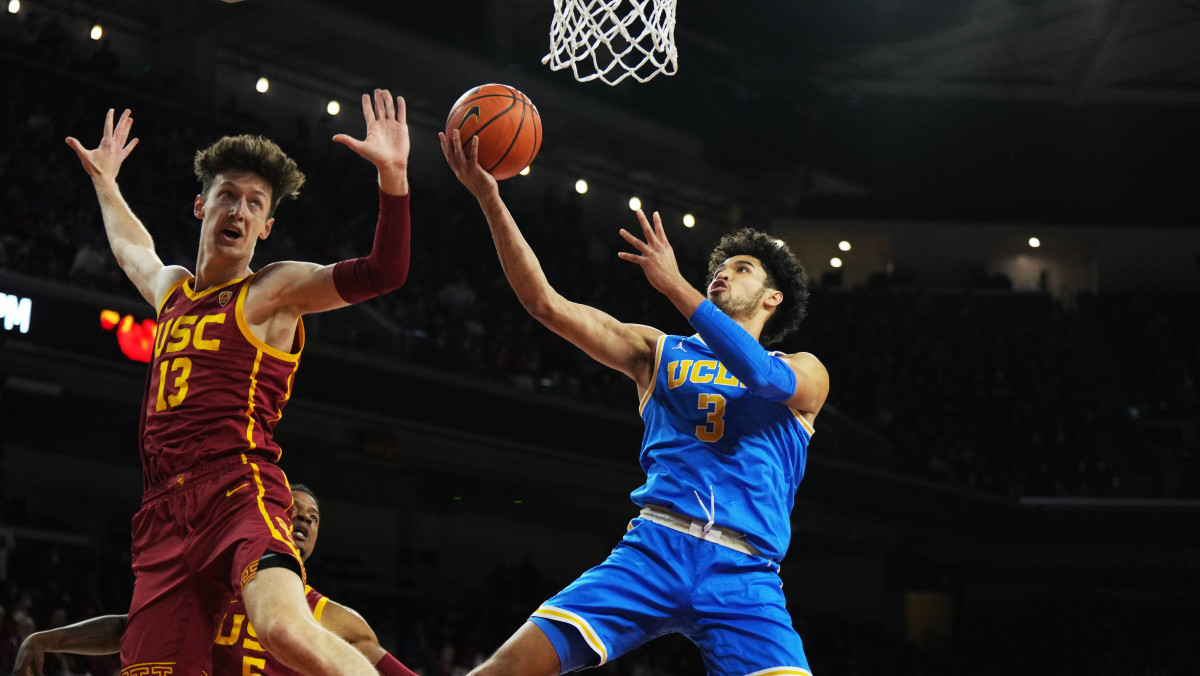 As he has done in recent times, the confrontation between the Bruins and the Trojans ended in a 3-pointer at the buzzer.

This time it was blue and gold that pushed the desperation. Unlike Tahj Eaddy and Ethan Anderson before him, Tyger Campbell’s try with time expiring slammed on the back edge, and it was Cardinal and Gold who emerged victorious.

With the largest section in Galen Center history filling the building, fans stormed the field and assaulted players and coaches as tunes and chants rang out loudly through the media availability of UCLA postgame.

“I don’t know why anyone would storm the pitch for beating us,” said coach Mick Cronin, whose side have now lost three out of four games.

As close to the end as it could get, UCLA played from behind for much of the night in a blow-for-blow battle of teams that both depended on one player – Tyger Campbell and Drew Peterson. Any other night it probably would have been forward Isaiah Mobley for USC, but he was out with a concussion on Saturday.

Not even 90 seconds into the opening spike, Campbell grabbed an elbow to the face, which officials ruled was not egregious. The physics down below highlighted a messy opening streak that included a pair of missed layups for the Bruins and a handful of turnovers and 3-pointers contested.

UCLA made its first real run with a pair of Campbell jumpers, free throws and quick scoring from guard Johnny Juzang. That stretch only put them 10-6 up though, and it took USC just two minutes before they regained the lead.

The Trojans made that jump by hitting 3 runs, including three in a row from forward Harrison Hornery, guard Reese Dixon-Waters and guard Drew Peterson. USC went up six when Peterson drilled another triple, but forward Cody Riley immediately responded with his first 3 of the year during a three-minute streak without a single dead ball.

Peterson stayed hot from three after the media timeout, putting the Trojans ahead by eight with another 3-pointer minutes later as the Bruins continued to miss jumpers and get stuck around the hoop . Campbell went 8-0 on his own, hitting two 3s and a pair of free throws to even things up at 31 in the final minute of the first.

Peterson drilled a fadeaway jumper to take USC to a 33-31 halftime lead, nearly matching Campbell’s 16 points in the first half with 15 of his own in just the first period. Outside of Campbell, UCLA was shooting 6 of 22 at the break, while USC was shooting 8 of 22 not counting Peterson.

The teams combined for a basket before the Under-16 timeout in the second, and it was Peterson who knocked it down. Guard/striker Jaime Jaquez, who was scoreless in the first half, finally got a shot only to come down on a foul a minute later. After missing the free throw and-1, Jaquez got the offensive rebound before Campbell assisted a 3-point draw from Juzang.

Jaquez scored again in the post, then Campbell hit a few more free throws to give the Bruins a brief lead, as Peterson went 1 for 2 at the line at the other end to tie it at 41 all.

Guard Jaylen Clark, just his second game after a concussion that put him out of competition for three weeks, got a second-chance bucket to drop the next possession and then fought his way to a layup quick to do it 45-41 .

Forward Max Agbonkpolo got back-to-back buckets to go in the paint, tying it up again and setting up Dixon-Waters for a pair of free throws that put USC up 47-45 midway through the second half. time. Guard David Singleton put UCLA back in place for a moment, on a 3-point shot, which Anderson responded with his own triple seconds later.

Peterson extended the Trojans’ lead to four with a jumper on the wing, then Anderson shook Campbell on the fast break for a layup that rocked the Galen Center. USC’s defense was doing even better, holding UCLA to 1-of-11 shooting until Campbell got an and-1 on a scoop layup to cut the deficit to three.

This game may have killed the crowd noise for a while, but Peterson went 1-for-1 against Riley and knocked down his fourth 3 of the night to get the home fans back on their feet. Peterson found forward Cheven Goodwin rolling to the hoop for a two-handed slam, which sent him back down the court holding “USC” to his chest. When Cronin burned a timeout, Agbonkpolo jumped onto center court to swell the crowd, which was mounting high on the way to their fifth consecutive victory over rivals Crosstown.

Campbell came down and hit two free throws, then Riley did the same to make it 61-57 with 3:27, but a loose ball foul from Jaquez led to a few free throws for Goodwin.

Campbell stole the sloppy entry pass, giving UCLA a chance to tie things up and potentially force overtime. The playmaker’s avalanche of points has only led his side so far, however, as he escaped a 3 step back into the corner and picked up his fourth turnover of overnight in the process.

“It’s disappointing, but he was the only reason we were in the game,” Cronin said. “We were just talking about it, when we were down sixes, you don’t take a bad 3. At the end of games, you have to extend the game, you have to score two or three. … For some reason , I don’t know, he’s a great boy, a difficult situation.”

Agbonkpolo got a quick layup from the fiasco, and Juzang’s free throws with 2 seconds left only set the Bruins up for more disappointment. Clark swung the ball to Campbell in bounds, and he kicked off the half-court lift that touched the back edge when the buzzer sounded.

Campbell finished with a new career-high 27 points, while Juzang was the only other Bruin in double figures with 12 on 4-of-16 shooting. Peterson had a career-high 27 at the other end.

UCLA will return to the field next Thursday at home against Washington State.