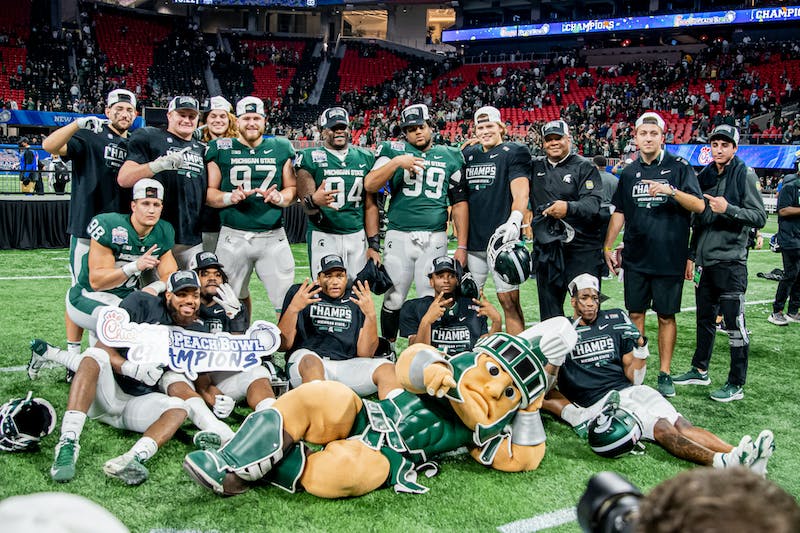 What You Missed During Winter Break for Michigan State Athletics

With the start of the spring semester, it’s only fitting that we take a look at what happened in Michigan State athletics over the winter break. Below is an overview of everything you may have missed during the holidays.﻿

The women traveled south to West Palm Beach, Florida for a two-day invitational event. Game 1 against Florida’s Gulf Coast on Dec. 20 turned out to be a record when senior guard Nia Clouden surpassed All-American Tori Jankoska’s 2017 record of 42 points and became the first athlete in MSU women’s basketball. history of posting 50 points in a single match. She is now tied in the record books with former men’s basketball player Terry Furlow, who set the record 50 points in 1976.﻿

Despite Clouden’s hard work, the Spartans lost 85-84 in double overtime, and Game 2 against West Virginia on December 21 showed no improvement when they lost 74-54. Clouden has nine 20+ point games this season. She also moved up to 7th on MSU’s all-time scoring list and is sixth in the nation in scoring, averaging 22.5 points per game.

The men began their warm and ready winter break period with a game against Oakland at Little Caesars Arena, where they beat the Golden Grizzlies 90-78. Senior center Marcus Bingham Jr. had his best offensive performance of the year, scoring 17 points on eight of 10 shots.

They then faced legend Tubby Smith’s High Point team. The Spartans trailed at halftime, but heroism from senior forwards Gabe Brown and Joey Hauser in the second half propelled them to a 13-point victory.

The Spartans then returned to Big Ten action with a hard-fought win over Northwestern on the road that saw plenty of fouls in addition to a poor offense. First-year guard Max Christie was crucial not only against his hometown Northwestern team, but also against their next opponent, Nebraska. . Christie helped defeat the Cornhuskers in the final game over the holidays with 21 effective points on seven field goals on nine attempts.

The rise of the COVID-19 Omicron variant had a big impact on both programs during the break.

The women were without freshman guard DeeDee Hagemann and graduate student guard Laurel Jacqmain for their Dec. 30 game against a previously undefeated Nebraska. Junior guard Moira Joiner was also out and showing symptoms of a concussion. However, they managed to overcome the adversity at hand and the Cornhuskers were forced to succumb to their first loss of the season, 72-69.

The Spartan Ladies road game against Northwestern on Jan. 3 was later canceled due to ongoing COVID-19 issues in the Wildcats program.

The COVID-19 troubles didn’t end there, as the men’s game against rival Michigan was postponed. The Wolverines were unless the Big Ten required a minimum of seven athletes to play. A date has not been confirmed for the rematch.

The women were lucky to end the holiday break on a high, but the Purdue Boilermakers surged in the fourth quarter as Clouden struggled on the offensive end as Purdue cruised to a 69-59 victory on Jan. 9.

And, in case you missed it, former MSU guard Alyza Winston announced her engagement at Mississippi State on New Years Day. by Twitter.﻿

After Purdue outlasted Tennessee 48-45 in overtime in the Music City Bowl, it was No. 10 Michigan State’s turn to make the rounds in the Chick-Fil-A Peach Bowl.

The first half of the game was eventful with plenty of doubts, as key junior running back Kenneth Walker III opted out of the NFL Draft. The Spartans trailed No. 12 Pittsburgh 14-10 at halftime with plenty of offensive hiccups and the Panthers went just 21 over midway through the fourth quarter.

However, head coach Mel Tucker and his team are known for their spectacular fourth quarter comebacks. Redshirt sophomore quarterback Payton Thorne managed to connect with his high school buddy, redshirt junior wide receiver Jayden Reed, in the small right corner of the end zone for a touchdown to put the green and the white by three.

Like all night, the defensive line was there to save the day and provide the dagger. With Pittsburgh driving down the field and less than a minute on the clock, redshirt freshman linebacker Cal Haladay intercepted the road and threw his second pick six of the season into the end zone, finishing the score at 31-21.

Do you want the news without having to search for it?
Sign up for our morning newsletter. It’s everything your friends are talking about and more. And it’s free!

Tucker completed his second year with the Spartans ranked No. 10 in the nation and 11-2 overall.

After the win, redshirt junior wide receiver Jalen Nailor decided to forfeit his senior year and declared himself for the NFL draft along with redshirt senior offensive lineman Kevin Jarvis, who declined to using his COVID-19 year and declared himself for the draft. In opposition, Reed posted on Twitter that he will be returning for his final year of eligibility and to take care of “unfinished business” at East Lansing. Senior safety Xavier Henderson will also return for the 2022 season.

The hockey team appeared in its Great Lakes Invitational on Dec. 29-30, where it lost 3-1 to Western Michigan in Game 1 and earned a 3-2 overtime upset against Michigan Tech in Game 1. second game.

In their last series during the winter break, the Spartans faced a strong team from the Minnesota Gophers. Although they were leading or tied in both games late in the second period, the Gophers’ offense exploded in the second half of both games to secure a road sweep over the Spartans. Despite being just outside in search of a potential NCAA Tournament berth, the Spartans fell behind with their lackluster performance.

MSU announced that beginning January 1, all spectators attending indoor sporting events on campus must provide proof of vaccination or a negative COVID-19 test 72 hours prior to the start time of the event to to be able to access it.

Masks are still in effect and the COVID-19 vaccination requirement applies to participants aged 12 and over.﻿

To meet vaccination requirements, fans must show their vaccination card, along with photo ID that matches the name on the card. Digital images of vaccine cards will be accepted.﻿

If one is unable or unwilling to show proof of vaccination, one must bring photo ID and a printout of their negative COVID-19 test taken within 72 hours prior to the start time of the tour. event.﻿

Fans who are unable to attend are encouraged to transfer their tickets to others selling or offering their tickets for sale through StubHub, as no refunds will be issued.﻿

This story was featured in our January 11 special print edition. Read the full issue here.

Share and discuss “What You Missed During Winter Break for Michigan State Athletics” on social networks.